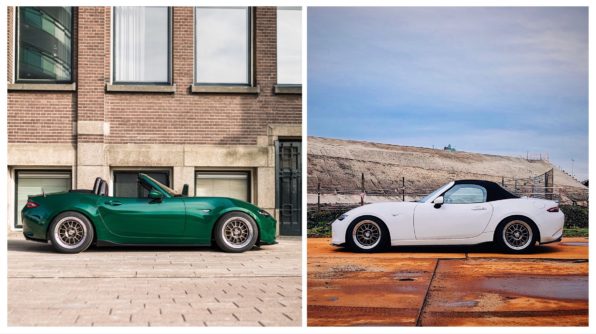 It all started with the first generation of the mx5 in 1989. This convertible was the best selling convertible car ever. It drove like a “Go cart” and you were able to put the roof down. This and the fact that it was introduced for a very reasonable price of 14.000 dollar made it into a huge success.

The whole idea of the mx5 series was to produce a light weight fun car.

This idea continued when Mazda created the second generation, the mx5 NB was produced from 1998 to 2005. It came with the same engines and suspension as the NA because the NA was a great success. The NB looked a bit newer but that was not to everyone’s taste. People missed the “pop-up headlights” from its predecessor.

In 2002 Mazda came out with the rx8. They used this base, chassis and suspension components to create the successor, mx5 NC. The reason for this was clear, Mazda was in a financial difficult situation but wanted to introduce the new mx5 to boost their sales. The NC became the bigger brother of them all. At its introduction in 2005, it won the Car of the Year Japan Award and made Car and Driver's 10Best list from 2006 to 2013. The NC is the first MX-5 generation to feature a retractable hardtop variant, with its roof being able to fold and unfold in 12 seconds without sacrificing trunk space. But this has always been the generation that was the least successful due to its weight and more heavy looks.

Then in 2015 Mazda started off producing the 4th generation, called the mx5 ND. The design was done by Nakayama in 2012 and his goal was to achieve what they did with the first generation, the NA. Light weight, high revving, small but very sporty convertible that can be used on and off track!

This turned out into a great success, not like the first gen but a lot better than the previous generation, the NC.

Since AST suspension has been in the racing market since 2000 we have suspension solutions for all models, the NA, NB, NC and the ND. We have been selling mx5 suspension kits for spec racing, for street use and for clubsport usage. The coilovers don’t just lower that center of gravity but they create less body roll and turn the car into a true race car if you want. AST has been known for producing custom made suspension solutions for different purposes.

Inquire now for your mx5 or miata. We know what you need!

This brings us to one our customers. Philip uses his mx5 ND for daily drives, stancing, fun spirited drives and track days. A pretty hard combination as you can imagine. Our 1-way adjustable suspension (5100) is the perfect solution for this. Its compliant at the streets and give comfort on high speed bumps, but when pushing through corners during the spirited drives or at the track, it feels sturdy and gives you all the trust in the car that you need.

The car started off as a white, Recaro fitted and stock mx5 ND.

When Philip installed our AST suspension coilovers he decided the fit wider wheels because his cornering speed was now compromised by the tires. After he contacted Work wheels he soon got his Work Seeker FX in 16x8 to fit wider rubber. The combination was great but Philip was looking for a classier look. British Racing Green was the best choice and so he wrapped the car in BRG. This came out amazing! He uses the car on and off track and therefor he also uses 15” 6UL wheels with R888R toyo semi slicks.

It did not end there:

What do you think? More pictures and info can be found on our social media: Facebook and Instagram